Showing posts with the label school holiday
Show All 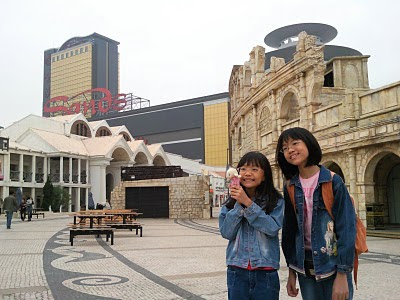 16 March 2010, 2pm: Macau Fisherman's Wharf
The Fisherman's Wharf was just across the road from Macau Sands Hotel. Surprise Surprise! No transport required, just walk over.
The Macau Fisherman's Wharf is the first theme park in Macau.  It is located in the Macau Peninsula, near the Hong Kong-Macau Ferry Pier.  The construction took 5 years and was officially opened on December 31, 2006.
We climbed Vulcania, a 40m tall replica volcano.
From the volcano peak, we could see Sands Hotel clearly.

Lunched at a Chinese Restaurant in Fisherman's Wharf. The good waiters guided us to our next destination. They advised us the bus to take to A-Ma Temple. Before we left, the kids had a short ride in the underground amusement centre.
I thought this view of Sands Hotel was interesting. It's a view from a Fisherman's Wharf men's restroom.
Next stop, A-Ma Temple! NEXT...